About a month ago, I got an email from Michael, a British guy who was planning a long weekend in the sunny and much warmer Valencia along with his girlfriend Laura. What Laura didn’t know yet was Michael chose Valencia for a surprise proposal. He contacted me for organizing a special surprise proposal photo shoot and asking me which locations were more suitable for a romantic photo shoot in Valencia.
I replied him without a doubt by saying the Jardines de Monforte (Monforte Gardens) was the perfect Location.

The Jardines de Monforte is a lovely and peaceful garden oasis in the city heart of Valencia. Its pleasant neoclassic style stands like a romance invitation. Gravel paths adorned with Italian marble sculptures in the shade of trees, small ponds and flower beds make this charming place a great location for a romantic photo shoot in Valencia. This was the most obvious place I suggested to Michael for his surprise proposal to Laura.

Michael wanted his girlfriend wouldn’t suspect anything and think the visit to the garden was just part of another sightseeing to discover together in Valencia. That’s why I suggested to Michael to identify the right place where making the surprise proposal with me already there acting like a casual tourist and ready with my camera to set the scene.

As I ‘ve only seen the Monforte Gardens once for a few quick photos, I decided to go back and take a deeper look to the gardens. To offer a professional photo shoot, I had to to see and study the most scenic corners and places for posing and the perfect location where Michael could make his surprise proposal by kneeling and offering a ring to unaware Laura. Once, I found what I thought could be the suitable and magic place for the surprise proposal, I took a photo of it and send it to Michael along with a map of the garden.

Since then, we kept in touch constantly by email till the great day. We arranged for the photo shoot in early morning because the right light and color tones and also to make sure we hadn’t too may visitors around. I was already there pretending to be a normal tourist shooting some photos when Michael and Laura arrived. Laura was smiling to Michael and you could read in her eyes she was greatly enjoying the weekend in Valencia. Both were honestly as they looked so relaxed to me while walking and pointing both to the pond now and to a specific statue then. When Michael saw me (we sent our face photos by email in order to make sure to recognize each other!), he stopped a few metres from me, he took a small red box from his jacquet pocket and suddenly knelt down in front of a surprised Laura. I took dozens of photos in this quick surprise proposal. Laura looked like the most surprised person in the world in that specific moment, then she literally exploded in a mixture of laughter and tears. The looked like the happiest couple in the world under the warm Valencia’s sun. Michael introduced me to Laura and explained her the setup we organized since weeks. One week later, I sent to Michael, by wetransfer.com, all the professionally edited photos of the surprise proposal we arranged previously. I got a Michael’s email a few days later. He was happy about the result of the photo shoot and he said both were keeping the surprise proposal at Monforte Gardens as the most beautiful moments in their lives! 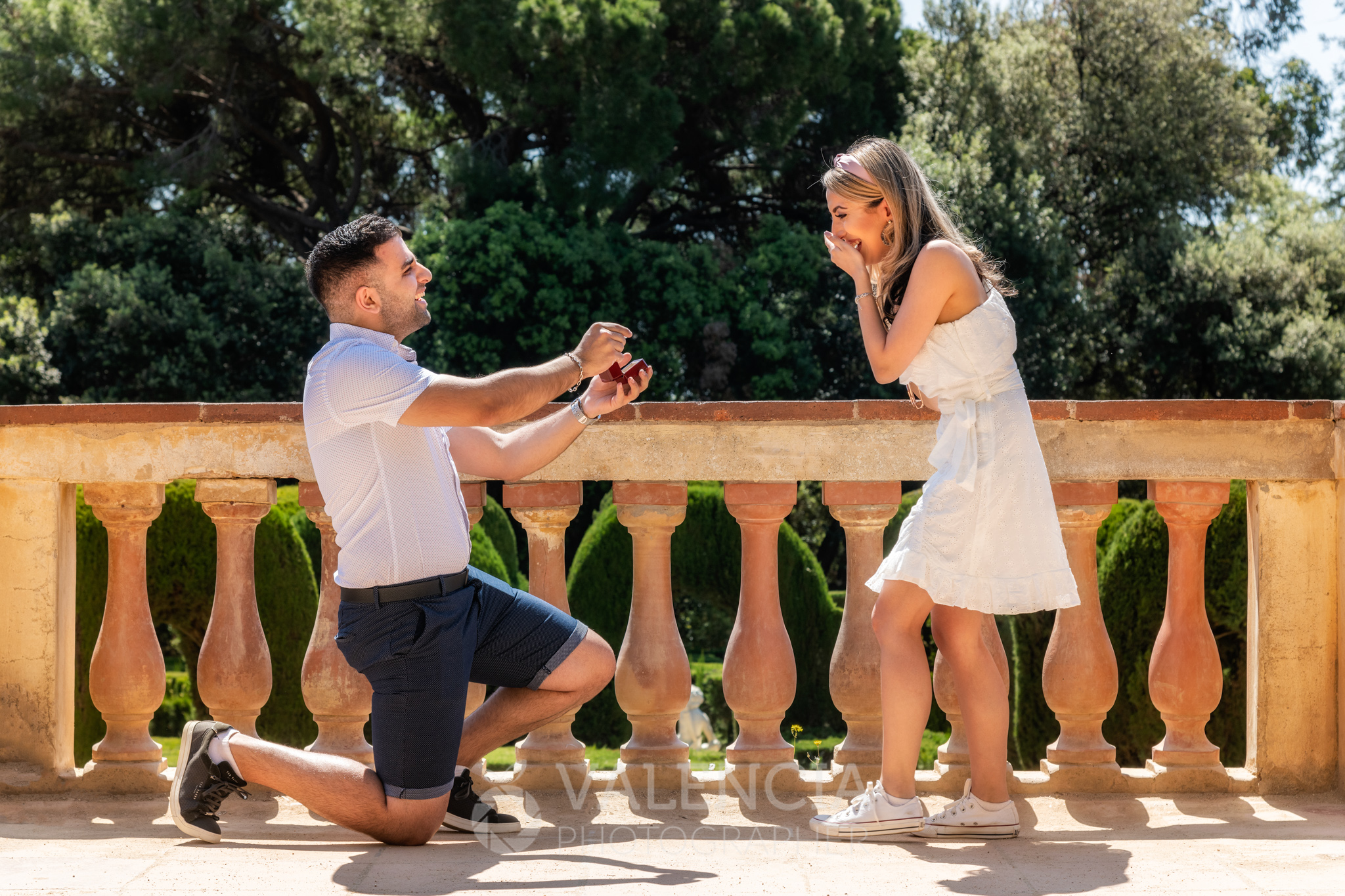